Originally recorded some 60 years (!) ago by the Shirelles, it’s a song famously covered by numerous artists, including the noted version by co-writer Carole King on her 1971 landmark album, ‘Tapestry’.
So, some big shoes to fill, but Harman, who only ever records a cover if she can connect to the lyric, takes it to ‘Harmansville’ – a trademark emotive ballad involving a ‘less is more’ arrangement featuring Mark Edwards on Yamaha Grand Piano and Terry Lewis on Telecaster Guitar. The recording features a suitably beautiful sonic capture by multi Grammy nominated/Brit Award winner James McMillan at Quietmoney studios.
As Solar Radio stalwart Clive Richardson kindly remarked ‘If you are going to cover a well known tune, make it your own and Jo Harman certainly does that very thing here – a gem’. Meanwhile, Chris Wells, Editor of Black music bible ‘Echoes’ declared this release as ‘recommended, we mean, really, seriously, recommended’.

The vinyl edition of ‘Signature Soul’ now contains two bonus tracks not available on the EP, thanks to the kind courtesy of Stefan Redtenbacher and all the fantastic musicians – musical royalty one and all – who have allowed us to add the ‘Masterlnk’ versions of ‘Cloudy’ and ‘Cyprus Avenue’ when Jo was originally invited in to guest with ‘Redtenbachers Funkestra’, which in turn led to Jo recording the ‘Signature Soul’ sessions.

Musically, it’s one of the greatest projects we’ve been involved in. The quality of the playing – and singing,  of course – is simply something else. And 100% live too. It’s always a special moment when it all comes together. Particularly when, as in this case, there was no real expectation other than to have some fun and the band chemistry, however great the players, can’t always be assured. But the magic definitely came into the room for these sessions and it’s so wonderful that it was all captured so well for posterity. This is an album of rare quality and beauty. Jo will be the first to say this is a real team effort and even the artwork, a modern take with a retro nod, only adds to the timeless feel of this important record.

To try and be fair and appreciative to all Jo’s amazing supporters we’re going to include the CD/DVD version to everyone who now orders the vinyl.

Lead song from ‘Signature Soul’ is ‘Loving Arms’ which has received considerable airplay and already attracted a very healthy 30,000 streams and features on some important in house playlists. Thats pretty much a hit these days!
Order the CD Signature Soul now.

In a world where vocals are tuned to an inch of their life and producers ‘comp’ vocals from numerous takes, it’s refreshing to see a modern day vocalist doing it for real; sitting in the same room as the musicians, much in the way the likes of Dusty and Aretha did ‘back in the day’.

After a three year absence, Jo Harman recently returned to the recording studio, where she cut an entirely unedited set, aptly entitled ‘Signature Soul’ reflecting the inimitable nature of Jo’s work as both a vocalist and as a song writing artist about whom noted French Daily Newspaper ‘Le Voix Du Nord’ described as ”…the most beautiful soulful voice of England. A bewitching voice, an impressive stage show, Jo Harman mixes intimate ballads, energetic rock, soul, blues, acoustic and gospel, brought together by the magic of a music that is at once classic, innovative and timeless.”

Basically, what everyone played and sung in the moment is what you hear on this record. ‘Fixing’ and ‘editing’ is impossible anyway, simply because there is no or little separation between the players involved, singer included. The way that Jo and the guys approached this was pretty much that Take One was the run through to nail the changes and for the players to come up with some parts, Take Two was to test it out and Take Three was the record.

On material that might ordinarily involve added instrumentation, overdubs included, Jo and the guys had nowhere to hide. Raw, exposed, naked, just those four instruments and THAT voice. Real, natural, organic, soul.

Official release expected around March and will be available in Vinyl, CD/DVD format (Including videos of each song plus a mini documentary of the project) and CD only.

Additional live backing vocals on ‘Say That You Want Me’, James Welch.

Next ‘single’ from Jo Harman to go to digital is ‘I’m Gonna Keep You Guessing’ out 25th October 2019. You can pre-save it by clicking here.

This particular track has already received significant radio support – not least from Robert Elms at BBC London – and follows hot on the heels of previous singles ‘Sideways’, ‘When In The Night Hour’ and ‘Cloudy’ which, collectively have already reached 250,000 Spotify streams (and rising).

Another way to enjoy all these tunes and 9 others of equally superb standard is to join the thousands already who have done so and buy the double EP ‘Found A Place’ as a physical CD available here.

In an increasing ‘music by numbers’ world how refreshing to see a line up of not one, not two, but three ‘best in class’ artists of rare credibility and sincerity when US Grammy Winner Mike Farris, UK Soul/Blues/Roots Diva Jo Harman share a double bill at Fulham’s prestigious Under The Bridge venue, for London Blues Festival, supported by upcoming Northern Irish blues/roots protégé, Dom Martin.

JOINT HEADLINERS JO HARMAN (UK) AND (EXTENDED) BAND/ MIKE FARRIS (USA)
Widely regarded as Europes most credible – and indeed, uncompromising, artists – Jo Harman has been described by the Daily Mirror as ‘UK’s best female blues/soul voice’. An artist who, according to Classic Rock, writes ‘lip bitingly beautiful songs’ whilst Blues Magazine aptly report ‘Harman’s music, not least as transmitted by that voice, simply mainline the human soul’.  With an enviable CV main stage at some of the world’s best Festivals and venues, Harman many industry fans include Rag N Bone (‘one of our finest talents’), Huey Morgan (‘sometimes you hear a voice that leaves you speechless…I am!’) and Michael McDonald (‘hearing Jo sing is a spiritual experience‘). Indeed, McDonald offered to duet with Harman on her masterwork ‘People We Become’ album – no little kudos from a man whose previous female duet partners numbered Aretha, Joni, Carly, Patti and Chaka (surnames not required!). As roots bible ‘No Depression’ remarked ‘other critics have made comparisons with Joni Mitchell and Carole King – this is not hyperbole, there is something very special here’. A Jo Harman performance can often be less of a musical concert, more an emotional adventure.

Tennessee’s Mike Farris is another ‘one of a kind’ talent . A talent that was rewarded with a Grammy for his ‘Shine For All The People’ which was followed with the equally revered ‘Silver and Stone’ album of last year. Mixing gospel, rock, soul, blues and more, Farris is a true powerhouse performer of whom Rolling Stone declared ‘(his) supersized voice (is) filled with the electricity of Saturday night and the godly grace of Sunday mornings’.  UK’s own respected elder and tastemaker Bob Harris advises “I truly believe that Mike Farris is one of the great artists of today. He sings the truth with a depth of feeling that warms my heart and touches my soul” whilstAmerican Songwriter Magazine confirm “There aren’t many current male singers who use their voices to soar, float and deliver material with the spiritual commitment of Mike Farris”. A reformed addict (sober now for several years) Farris has faced down his own demons and embraced his personal angels in equal measure and these experiences inform and underpin his uniquely sincere and heartfelt voice and musical message to inimitable effect.

SPECIAL GUEST DOM MARTIN (NORTHERN IRELAND)
Although a young man new to the scene, it would be wrong to think Dom Martin hasn’t paid his life and musical dues. Brought up in the often tough, but community driven, streets of Belfasts, Northern Ireland, Dom traded his craft for years locally without a (self confessed) clue how to break into the (international) music business and possibly with too much humility to try. ‘Discovered’ by current manager Fenton Parsons, Dom has made a fairly ‘meteoric’ rise in terms of todays industry, with his first ever EP release attracting BBC 6 music and BBC Radio 2 support – including a converted session with Cerys Matthews – and, quite rightly, he now has a number of international tours and Festivals in the book for 2020. His jaw droppingly – entirely natural’ sounding, and unforced/unschooled – skill on acoustic guitar, matched with an authentic ‘Belfast blues’ voice, brings to mind comparisons with many from John Martin to Rory Gallagher, with nods to many in-between, not least perhaps the likes of Van Morrison and Foy Vance. Dom really is one to watch and quite rightly specially selected by both Jo Harman and noted promoter Adrian Gibson to be the special guest opening act of this bill showcasing the very best of the international blues/roots/soul/rock/singer songwriter scene.

On the evening itself, Jo Harman will be playing a full set, with an extended band, plus the incredible US Grammy Winner Mike Farris will be joining her on stage for a few tunes, following his own solo performance (a tour de force in itself!). With the wonderful Dom Martin, flying in from Belfast especially, to open up proceedings this will be some night at a prestigious, award winning London venue! Something of a Festival, within a festival, indeed, a limited number of half price early bird tickets are now available at a truly bargain price £11 plus booking fees.

Latest TV will be screening an entire Jo Harman concert between 7-8pm every Friday in September. For those in the Brighton area it’s Channel 7 on your TV Remote and Virgin Media 159 plus, worldwide, it (from 6pm) can be streamed live via https://thelatest.co.uk/latest-tv/

The concert, recorded at the Latest studios in front of a select audience of fans from all over the country, features much of the material from ‘Found A Place’, recently re-released as an extended edition double EP which is doing remarkably well, thanks to Jo’s incredibly supportive fanbase.

The concert itself features a crack band of Martin Johnson, Nat Martin, Stevie Watts, Andy Tolman and, special guest, Mark Edwards who, together with producer James McMillan, who played a huge part in the recording of ‘Found A Place’.

On the day the most recent single ‘When In The Night Hour’ hits 50k streams, Jo Harman announces that her next single ‘Sideways’ will be released this Sunday – and you can pre-save it by clicking here.

Although the release schedule for ‘Sideways’ has been in place for months, it’s rather apt that Jo will by opening for the song’s composer Citizen Cope when Cope tours here in October, for Adrian Gibson at AGMP Concerts namely :-

Jo also has a number of her own headline shows around this period starting at Exeter Phoenix on 12th September – please click here for more information.

Both ‘When In The Night Hour’ and ‘Sideways’ appear on the ‘Found A Place’ double EP physical CD set available here.
It is also available on iTunes

Jo is delighted to announce a rare London show at OMEARA near London Bridge on Sunday 2nd June. If you’ve not been to Omega the venue is owned by Ben Lovett of Mumford & Sons and has an old regency ballroom feel with a clever raked floor which makes standing shows easy to see.
Tickets (£15 + fee) can be found here. We will announce the support artist soon. 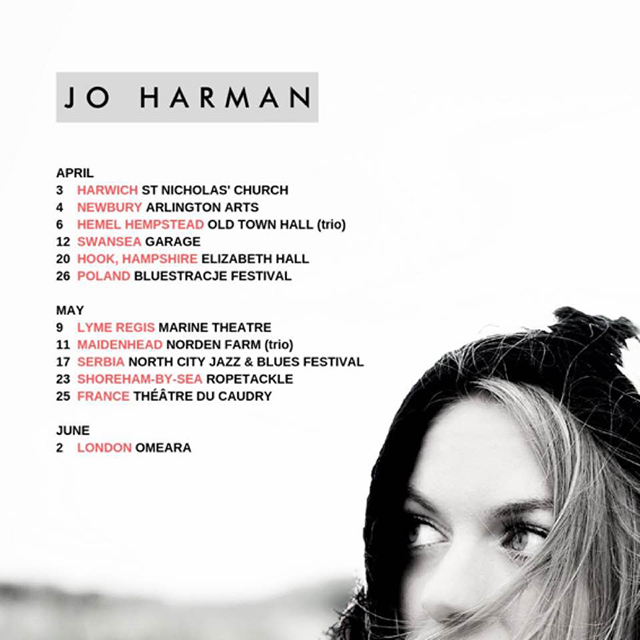 Jo undertakes a selective Spring Tour which includes Festival appearances in places as far flung as Serbia, Poland, France and of course, the UK, finishing with a London show at Omeara on 2nd June. Moreover, Jazz Royalty Orphy Robinson MBE has persuaded her to appear on 6th July as special guest vocalist for the 50 years celebration of Van Morrison’s ‘Astral Weeks’ project at this years ‘Love Supreme’ Festival.